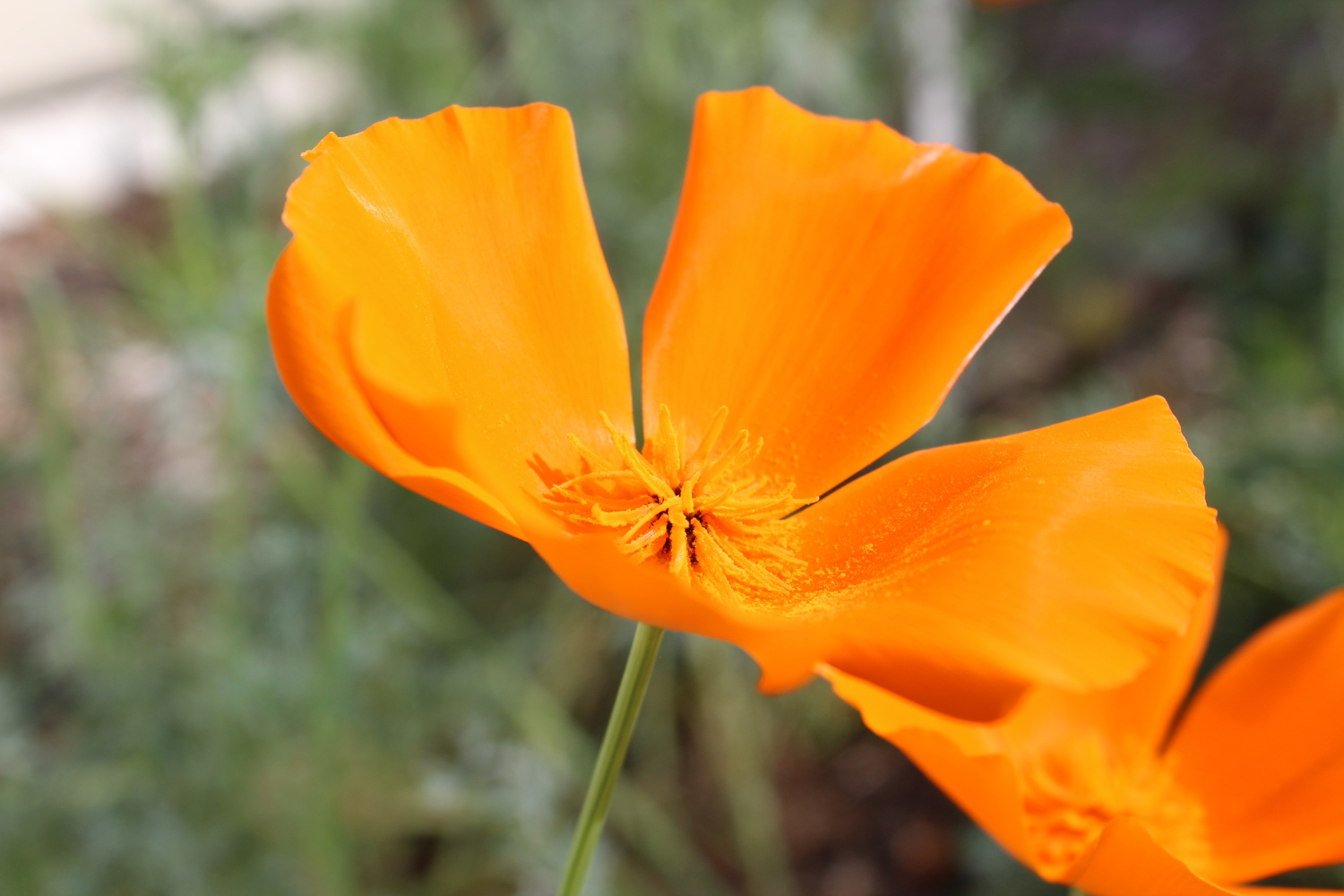 The Vineyard Year in Review

It is late October and we wrapped up our second harvest with a final bin of Syrah from the Lewis Vineyard in Ventura County on October 12th.  It was a seven week harvest from start to finish that saw us bringing in fruit from three counties.  Quality was high and we were able to harvest right at the peak of ripeness despite recurring heat spells. We've been really impressed with what we've been tasting so far and are excited to build on the great wines we produced in 2016. Now that harvest is in the rear view mirror its time to take a quick look back at the season.

The 2017 season started with a lot of promise as we finally received a normal amount of winter rains which recharged our soils after years of drought. The rain started to wash away accumulated salts from irrigation and was a welcome return to normalcy. This blessing was also accompanied by an explosion of weeds.

The vineyards we farm are mostly steep hillsides with six feet between rows. Unfortunately, the slope and tight spacing means that we can’t squeeze a tractor between rows safely.  This provides us with only a few options for weed control. We looked into having sheep graze the vineyards weeds and that looked both trendy and promising, but our budburst is so early that we could only remove one weed trimmer pass by using the sheep.  The weeds continue sprouting after budburst and at that point the sheep would devour the baby grape leaves as well. All the weeds in Ventura County seem to either have thorns or cause skin irritation so I'm positive that the sheep would prefer the grape leaves. Hence, weed control by sheep is out.

We could spray a herbicide to kill the weeds, but we really try to minimize our use of herbicides. Some particularly nasty weeds like tumbleweeds adjacent to the vineyard may get an herbicide spray, but we didn’t use any during all of 2017 and we will again try to avoid them in 2018. Instead we diligently went at the weeds with trimmers week after week to keep them under control and managed.  We started weed trimming the second week of February and this activity continued the entire season.  During this year we are looking at cover cropping winter rye and vetch to reduce erosion, build the soil, and crowd out non-desirable weeds. Hopefully it works and reduces the amount of weeds next year.

In Southern California we don’t get very cold winters and Santa Rosa Valley in particular has its last freezing temperatures around the third week of January.  Our weather starts to slowly creep warmer at that point, and by about March 9th we are reasonably secure from frost risk.  During warm years we will see bud swelling in late January and early February so we try to time our pruning right towards the end of the frost risk season.  Pruning can delay budbreak by a week, so we try to build in this insurance if we can.  This year we finished pruning on January 31st.

We really took our time pruning this year and focused our efforts on matching the number of spurs to the vigor of individual rows. In conjunction with this we planned our irrigation on a block by block and row by row basis to cut down on hedging and bring the vineyard into more balance between vegetative and fruit development.  Overall we did a pretty good job with this, but there are some really vigorous rows where we could have been more aggressive in shoot and leaf removal just before veraison to increase airflow through the canopy. During the winter we will also probably add wider cross arms to the trellis on those rows to open up the canopy a bit more. We tested wider cross arms on a small block of Syrah this past year and really liked how it improved the microclimate of this particularly vigorous variety and will look to wider cross arms as standard moving forward.

There is no one-size fits all approach to irrigation.  Water is a precious resource in Southern California and we try to use it respectfully, but in our arid climate it is a fine line between just enough water and showing up one day with no leaves left on your canopy. Experience with each vineyard helps as does paying attention to upcoming heat spells and watering in advance of those.

We successfully cut our water usage in one vineyard by 50% over the previous year while also cutting our hedging down to one pass.  In another vineyard we actually had to increase our watering times significantly in order to help some vines get better established after having been planted during our drought years. In a head-trained and wide spaced vineyard we managed to water only a handful of times, but lost quite a bit of fruit during the really hot weather in early September. Overall, I give us a solid B+ on our irrigation.

During February we spread composted chicken and horse manure by hand over the hillside vineyards to replace lost nutrients and continue building a healthy soil. Our soils are naturally low in organic content so we work hard on building that in year after year. We see the benefit in reduced compaction and improved tilth as a result of adding compost, but this activity is huge amount of work on the steep hillsides.  Both organic and conventional fertilizers work and we employ both, but we see improved vigor and health in the composted vines so we take the time to use compost wherever we can.

We also replanted some spots of the vineyards with potted plants that we’ve been raising for this purpose. Normally we’d wait until late spring to plant, but our warm winters allow us to get the dormant potted plants into the ground early without problems.

March 6th saw an even, full budburst on Sangiovese with sporadic budburst on Grenache, Zinfandel, and Mouvedre.  March 10th saw full budburst on the topmost elevation block of Syrah we farm and coincidentally saw a frost on the lowest portions of the valley. Fortunately, the lower blocks started budburst ten days later and were unharmed from the late frost.  Cabernet Sauvignon started a week later on the 23rd of March and our Primitivo had budburst on April 3rd.

Our organic powdery mildew spray program began on the 14th of March and continued at a 10 day interval through July.  Every property we farm has to be hand sprayed with backpack sprayers which is very time-consuming. Slow spray and complete coverage requires walking at a maximum pace of about 2 miles per hour.  We spray one side of the row and then walk around and fully spray the other side of the row.  One person can spray about 200 vines per hour.

This was a very unusual year for powdery mildew.  Our organic program does a good, consistent job if we spray every 10 days through veraison.  Three things caused challenges in our control problem this year. First, increased canopy growth fueled by moist spring soils contributed to increased humidity in the canopy.  Humidity increases powdery mildew pressure. Second, we had weeks of humid weather in the low to mid-80’s. This weather is very unusual for Ventura County and it increased powdery mildew pressure considerably. Third, most of our vineyards are adjacent to pepper trees and the pepper trees  have lots of scale. Scale are insects that weaken vines by feeding on its sap, but aren’t of themselves a major issue unless they are present at very high level.  Argentine ants (an invasive species to Southern California) tend the scales and traipse powdery mildew spores throughout the canopy. Your vines look great and then June hits and ‘Bam!’ a mildew outbreak because the scale and ants moved up into the canopy. As long as you don’t totally freak out you can clean most of the fruit with a contact eradicant like Stylet Oil.

Scale can be controlled well with insecticides and less well with soft treatments like oil. Natural predators like ladybugs and praying mantis will work on scale, but the ants prevent them from knocking back the population. During this upcoming year we will have to work harder to control ants and scale with cultural and insecticidal control.

The Lewis Vineyard is visible from the top of Russak Ridge and it started veraison around the same date. However, we didn’t begin harvest there until the 3rd of October it was 10 weeks from veraison to harvest for this vineyard. Year after year this vineyard takes a long time to fully ripen even with moderate crop levels so this was pretty consistent with other years.

Harvest kicked off this year on August 22nd with a pick of Tempranillo for rosé from the high desert region of Los Angeles County.

Two weeks later we had a pre-dawn pick of Grenache from the Swayze Vineyard. As always the fruit was picture perfect as we picked it by headlamp and had it off to the winery before the day heated up.

We harvested a single bin of grapes from Rancho Baila Sol in Santa Rosa Valley on September 10th.  This is a fun pick because it is flat vineyard of head trained, own-rooted vines planted on 8 foot x 8 foot spacing with minimal irrigation over the growing season.  The vineyard

contains Cabernet Sauvignon, Syrah, Sangiovese, and Primitivo and we harvest the whole thing as a field blend in one day and the owners throw a party for everyone that shows up to pick. On harvest day the grapes run the gamut from very ripe to not very ripe, but end up averaging somewhere between 23.5 and 25 Brix and 3.45 to 3.6pH after crushing.  Choosing the pick date on this vineyards is a challenge because each variety has a different ripeness and you are never quite sure if you harvested too early or too late so it really comes down to using your gut and letting nature dictate the wine you make.  Fortunately, the resulting wine in the barrel is already bursting with a character and all kinds of interesting notes and complexity.

Our Ventura County Syrah harvests kicked off with the Russak Ridge Vineyard on September 14th and continued with multiple picks at the Lewis and Kelley Vineyards through October 12th.

Between picks we cruised up to Santa Ynez under a full moon to have our Estelle Vineyard Sangiovese picked on October 8th.  It is humbling to watch a team of professional pickers at work. They pick fast and efficiently and make the rest of us look like we are standing still.

Overall it was a challenging season, but the hard work payed off in really beautiful fruit.